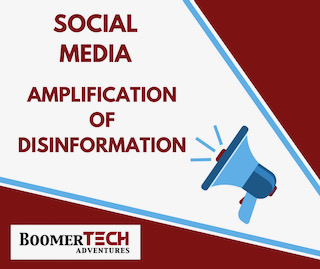 Social media certainly has turned out to be a double edged sword. Facebook, Instagram, TikTok, etc. are great ways to keep in touch with family and friends, learn new stuff, and be entertained. Yet, it has been weaponized by unscrupulous people who use it to spread disinformation, hateful messages, and discontent. Their purpose might be political power, financial gain, personal fame, or disruption of community norms or the common good.

These amplifiers may be home grown or foreign. When we share a meme on Facebook, we really have no way of knowing where or why it was generated or even if it’s true. For example, there are many memes circulating that attribute provocative quotes to famous people, living and deceased. How many of us check for accuracy before we tap the share button? 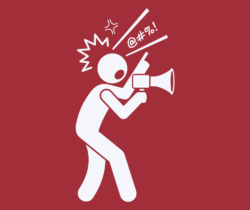 Purposeful disruptors: People with an agenda evidently spend hours searching internet message boards, Facebook groups, and cable news for tidbits of information they can distort or in some way use to advance their view of the world. Again, it might be to bring about political change or improve the financial conditions for a specific group or just to disrupt.

They will take a piece of truthful information, twist it and then combine it with falsehoods to create a totally inaccurate scenario. Because of that kernel of truth, many people believe what they read or view and don’t take the time to think critically about the report.

A recent example, of course, is the attack on Paul Pelosi, husband of the Speaker of the House. Many people with name recognition made jokes about the 82 year old man being attacked with a hammer or invented situations that were salacious and totally false.

Sometimes the spreaders of distrust use innuendo or ask questions in such way as not to invite a suit for slander. Here’s a prime example.

Elon Musk: “There is a tiny possibility there might be more to this story than meets the eye,” and then he included a link to a story on a less than reliable website that suggested a false report of the attack. Musk eventually took down the tweet, but not until it had received 100,000 views. Now imagine if only a third of those viewers retweeted his words and then their followers retweeted the account, how fast that false story must have been amplified. (https://tinyurl.com/vpfa4xs2) (https://www.cbsnews.com/news/elon-musk-paul-pelosi-tweets-link-to-conspiracy-theory-santa-monica-observer/)

Others will search the internet looking for raw material. In a recent article in Book Riot (a website that discusses books) author Danika Ellis reports that folks advocating book banning will search Facebook groups, shared Google files, and resources like Book Riot‘s website that publish helpful lists for parents and teachers wishing to provide books for their readers with diverse interests. The book banners copy the resource list and then publish it so others can insist at school board meetings or church groups or other public forums that the books be removed from library shelves because they are inappropriate. No discussion about the value of the books—just a demand to take them off the shelves based on a list found on the internet. 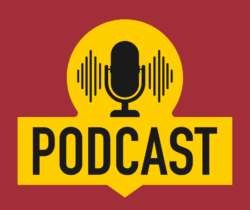 Many of the influencers are benign. They are making a living advocating that their followers use certain products that companies pay them to promote. Addison Rae has 38+ million followers for her beauty tips.

You can click on the link to see the rest of the list. Notice that the influencers are usually associated with one end of the political spectrum or the other. We all should check out our favorites’ veracity.

For example, U.S. District Judge Mary Kay Vyskocil, a President Trump appointee, said this about Tucker Carlson, using points made by his employer’s (Fox News) lawyers, “The ‘general tenor’ of the show should then inform a viewer that [Carlson] is not ‘stating actual facts’ about the topics he discusses and is instead engaging in ‘exaggeration’ and ‘non-literal commentary.’ Fox  persuasively argued, that given Mr. Carlson’s reputation, any reasonable viewer ‘arrive[s] with an appropriate amount of skepticism’ about the statement he makes.” Vyskocil, added, “Whether the Court frames Mr. Carlson’s statements as ‘exaggeration,’ ‘non-literal commentary,’ or simply bloviating for his audience, the conclusion remains the same — the statements are not actionable.” (https://tinyurl.com/2447z2mp)

On the other end of political spectrum from Carlson is Rachel Maddow of MSNBC. We can check out Rachel Maddow’s truthfulness at https://www.politifact.com/personalities/rachel-maddow/

If we read, view, or listen to a political influencer like Maddow or Hannity, we have a responsibility to fact check them. Places to fact check include:

In closing, we must remember that the social media algorithms determine what we see. “Social media algorithms take the reins of determining which content to deliver to you based on your behavior.” https://sproutsocial.com/insights/social-media-algorithms/. In other words, I see lots of dog and cat posts on Facebook because I tap on those cute, furry faces when they appear on my Facebook newsfeed. That’s an example of how the algorithms read my behavior on Facebook. I never see posts on rodent pets because I have never tapped on images of pet rats.

The same thing happens with political or cultural posts. I see only those posts that reflect my previous Facebook behavior.  Therefore I only see posts reflecting my belief system, and hence I live in a Facebook echo chamber or bubble—Only a certain type of political or cultural posts pop up so it is easy to believe these posts reflect the prevailing beliefs across the country.  Of course, that is an erroneous assumption and very short sighted. It’s good to go seeking other opinions, even if you are sure you will disagree with them. Seeking to understand is important.  Stephen Covey in his book, The 7 Habits of Highly Effective People, lists as # 5 —seek first to understand, then to be understood.

We are all motivated by what we hear, read, and view. It’s important to realize that many on social media are also seeking to manipulate us into adopting particular world views.  We need to sharpen our critical thinking skills when interacting with social media. Some of these skills include (https://www.betterup.com/blog/critical-thinking-skills):

Don’t we all have the responsibility of working toward a society that is civil and strives to improve lives for all of our members? Being a savvy consumer of social media is certainly one step in that direction. Be vigilant in not amplifying disinformation–let’s be part of a solution of repairing a disheartened nation, not part of the problem.

More from Our Blog 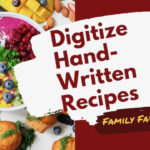 Anyone who cooks, bakes and saves recipes has a file or box of recipes that are hand-written or clipped from newspapers. Often these recipes are family favorites that have been handed down through the generations. Yes, you can find almost any recipe by googling it, but somehow the results just aren’t quite as tasty […] 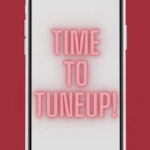 Many of us are guilty of benign neglect of our digital devices and as a result, sometimes they do not work at optimum capacity or we find ourselves paying to expand our cloud storage. Here a five tips for getting your digital devices into tip-top condition for 2023. 1.Clean up your Photos app. Photos and […]

Our Most Recent Posts 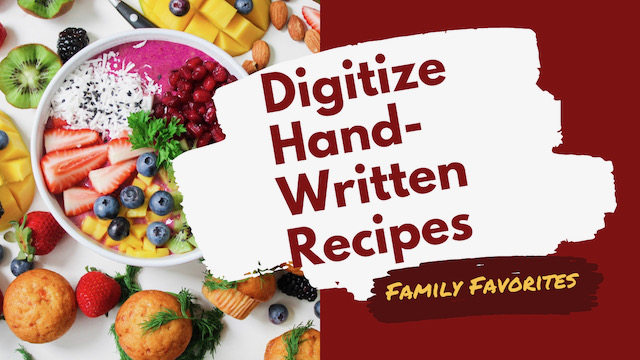 Anyone who cooks, bakes and saves recipes has a file or box of recipes that are hand-written or clipped from newspapers. Often these recipes are family favorites that have been handed down through the generations. Yes, you can find almost any recipe by googling it, but somehow the results just aren’t quite as tasty […]

Many of us are guilty of benign neglect of our digital devices and as a result, sometimes they do not work at optimum capacity or we find ourselves paying to expand our cloud storage. Here a five tips for getting your digital devices into tip-top condition for 2023. 1.Clean up your Photos app. Photos and […] 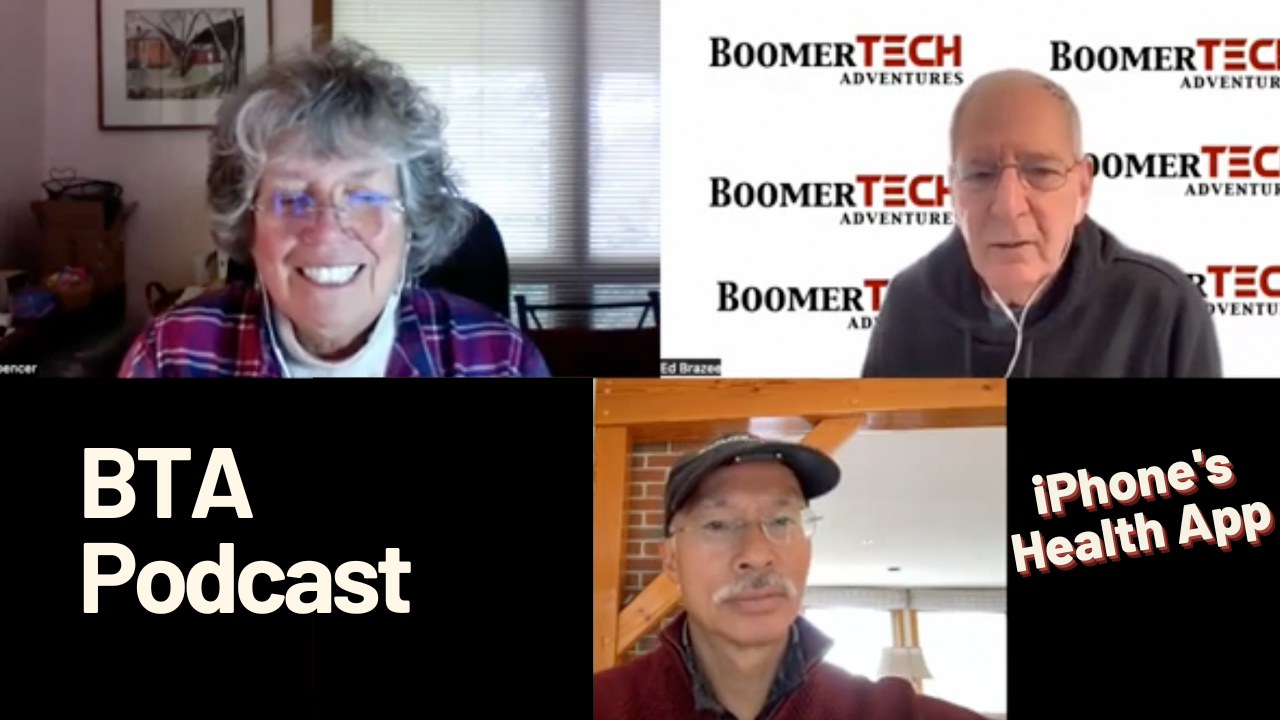 Stay Healthy and Fit With Your Health App

BTA Guides Chris, Jill, and Ed discuss the key features of the Health App on your iPhone. In this podcast we explain what the Health App does, why it is important, and what features are included. The importance of having your health information in one place cannot be overstated. Using the Health App allows you […]

Welcome to
How may I help you?
×